skip to main | skip to sidebar

January 11, 2008 -- People from different cultures use their brains differently to solve the same visual perceptual tasks, MIT researchers and colleagues report in the first brain imaging study of its kind.

Psychological research has established that American culture, which values the individual, emphasizes the independence of objects from their contexts, while East Asian societies emphasize the collective and the contextual interdependence of objects. Behavioral studies have shown that these cultural differences can influence memory and even perception. But are they reflected in brain activity patterns?
To find out, a team led by John Gabrieli, a professor at the McGovern Institute for Brain Research at MIT, asked 10 East Asians recently arrived in the United States and 10 Americans to make quick perceptual judgments while in a functional magnetic resonance imaging (fMRI) scanner--a technology that maps blood flow changes in the brain that correspond to mental operations. 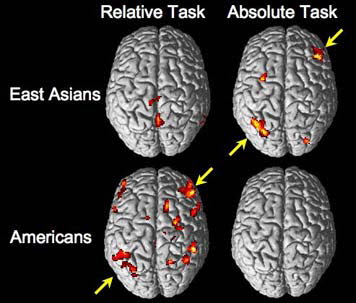 Brain activity in East Asians and Americans as they make relative and absolute judgments. The arrows point to brain regions involved in attention that are engaged by more demanding tasks. Americans show more activity during relative judgments than absolute judgments, presumably because the former task is less familiar and hence more demanding for them. East Asians show the opposite pattern.

The results are reported in the January issue of Psychological Science. Gabrieli's colleagues on the work were Trey Hedden, lead author of the paper and a research scientist at McGovern; Sarah Ketay and Arthur Aron of State University of New York at Stony Brook; and Hazel Rose Markus of Stanford University.

Subjects were shown a sequence of stimuli consisting of lines within squares and were asked to compare each stimulus with the previous one. In some trials, they judged whether the lines were the same length regardless of the surrounding squares (an absolute judgment of individual objects independent of context). In other trials, they decided whether the lines were in the same proportion to the squares, regardless of absolute size (a relative judgment of interdependent objects).

In previous behavioral studies of similar tasks, Americans were more accurate on absolute judgments, and East Asians on relative judgments. In the current study, the tasks were easy enough that there were no differences in performance between the two groups.

However, the two groups showed different patterns of brain activation when performing these tasks. Americans, when making relative judgments that are typically harder for them, activated brain regions involved in attention-demanding mental tasks. They showed much less activation of these regions when making the more culturally familiar absolute judgments. East Asians showed the opposite tendency, engaging the brain's attention system more for absolute judgments than for relative judgments.

"We were surprised at the magnitude of the difference between the two cultural groups, and also at how widespread the engagement of the brain's attention system became when making judgments outside the cultural comfort zone," says Hedden.

The researchers went on to show that the effect was greater in those individuals who identified more closely with their culture. They used questionnaires of preferences and values in social relations, such as whether an individual is responsible for the failure of a family member, to gauge cultural identification. Within both groups, stronger identification with their respective cultures was associated with a stronger culture-specific pattern of brain-activation.

How do these differences come about?

"Everyone uses the same attention machinery for more difficult cognitive tasks, but they are trained to use it in different ways, and it's the culture that does the training," Gabrieli says. "It's fascinating that the way in which the brain responds to these simple drawings reflects, in a predictable way, how the individual thinks about independent or interdependent social relationships."

How does this reflect on Autism and the autistic behavior, you may ask. Well, let me tell you a secret about autism. An autistic person, unlike the connotation of the word autism that points to the wrong direction by using the Greek word auto meaning self, and the notion that autism is a developmental disorder that causes the person to close themselves inside their own self, is an extremely social individual. The place to see and understand this somewhat oximoron as it seems to the neurotypical mind about autism and socialization, is Aspergia.

Autistics (and Aspergers) need others so much, we crave so much to connect with others, that we have unbelievable enough a very highly developed sense of the collective, so highly developed that when we don't receive the means to connect as we so much want and need, we turn against this internal need, and reject it, exclude it from our lives and become loners.

Autism is the result of a malfunction of the connection of the individual to the group, the collective. This malfunction begins with the bonding with the mother. Fraud once said that and mentioned the term 'Frigid Mothers' but even though his train of thought was pointing to the right direction, the term he used was very, very wrong!

What Freud did not understand was the way the female brain operates, and assumed that the the only purpose that a female has is to produce babies and care for them: the stereotype of the perfect Mother. The kind of perfect mother that religion portrays in the form of Maria and the baby Jesus in her arms.

What Freud did not understand is that the female brain is far more complex than that. And the role of the mother is only one aspect of its abilities, needs, and ambitions. If the female brain is not allowed to develop and embrace all of its capabilities, it also malfunctions, and it becomes unable to produce the 'perfect mother' that a child needs.

Society has in many ways contributed to this malfunction. In the 50s for example women were 'locked' up in marginal lives in suburbian-white-picket-fenced houses, isolated, unappreciated and very bored!

Such women had only two choices: to embrace this forced-upon-them lives, or reject them. Accepting made them good wives and mothers, rejecting them and becoming depressed made them bad wives and probably frigid mothers.

Now back to the bonding issue. If the person with 'autism' does not succeed to experience the pleasure of bonding, or if something happens that shatters that pleasure, or distorts the paths towards that pleasure, or receives negative experiences such as pain and fear from the act of bonding with another individual and primarily the mother, then secondarily the father, this person will exhibit an even more pronounced degree of autism.

Autism is the exposure of all the malfunctions that have now surfaced, and have become visible.

Freud was a genius. He saw this coming but he worded it in a way that caused a lot of people to disagree with him, people that were very short-sighted, because what Freud had once foretold science is slowly discovering now.

I am also aware that many of the things that I write here will be seen under the same 'ignorant' eye and will be thought as the senseless rantings of an autistic mind. That is fine with me. The future holds my justification, and I know that I am right.

This work is licensed under a Creative Commons Attribution-NonCommercial-NoDerivs 3.0 Unported License.

Behind the Asperger Mind